On this week's Foodie & the Beast were awash in great potables and related info. First to join us: Winebow's Jason Whiteside, proud holder of a Level 4 Diploma from the Wine & Spirits Education Trust (WSET) and a Certified WSET Wine Educator, in talking about the potential impact of new wine tariffs and with tastes of great wines to try as spring dining rolls in. Next up? Laura Evan, former Fox 5 news anchor and designated leader of DC Newswomen, the organization behind the 11th Annual NewsBash, Tuesday, February 18, where supporters dressed in head-to-toe pink, will raise money, awareness, and the roof to support breast cancer victims. And for people who maybe overeat, the cool new thing is cryo fat freezing. Radiance Med-Spa owners Marvin and Candice Lytle are in with all the deets on what it is and how and why it works to remove fat "especially pesky muffin tops" permanently. Also in Sabrina Medora of Un-Plated, the website known for meaty content about the food world, and the Coconut Club's bar manager, Chris Chapman. They've teamed on an alcohol-free cocktail event in response to demand for more, non-alcoholic options made with the same seriousness given to traditional cocktails. And speaking of cocktails, we also were joined by Funding Spirits" two key players, distillery director Jon Arroyo and vice president for sales, Clyde Davis, who told the tale of Farmers Restaurant Group's (Founding Farmers, Famers, Fishers and Bakers) new, DC distillery and whipped up cocktails (real ones!) with their branded vodka, gin, and whiskey. 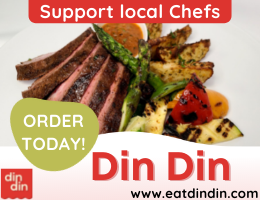